The History of the University and State Library

ULB is a young institution with an amazing history. Following its integration into TU Darmstadt in 2000, it received its new name in 2004: University and State Library Darmstadt. The roots of our library, however, reach far back into the distant past.

In 1567, Darmstadt became the residence of an independent principality. Over the following 350 years and more, the fate of the library was closely linked to the court of the Hesse landgraves and their literary and bibliophile interests.

The new sovereign, George I (1547-1596), brought a number of volumes owned by his family to Darmstadt Castle and had new, mainly theological, publications purchased. The library experienced a tremendous boost under his grandson, George II (1605-1661) and his wife, art-loving Sophia Eleonore of Saxony (1609-1671). She brought a number of magnificently bound books from the Dresden court with her to Darmstadt. It is thanks to her influence that an important hand-written collection of knowledge came to the library in 1644 in the form of the Thesaurus picturarum. A number of valuable scientific works originated from the legacy of Philipp III, Landgrave of Hesse-Butzbach (1581-1643).

In Baroque times, Landgrave Louis VI (1630-1678) and his son Ernest Louis (1667-1739) promoted the library: The first complete scholar's library was purchased with the works of Johann Michael Moscherosch. Professionalisation and consolidation came with the furnishing of rooms in the castle's bell tower and with the employment of his son Johann Balthasar Moscherosch as the librarian. Various inheritances and purchases of individual libraries up to the end of the Ancien Régime enriched the court library and the princely family's private libraries. Two catalogues with entries from the years 1586–1595 still exist today, providing information on the composition of the library created by George I.

This collection was systematically and methodically expanded.

The library had its biggest boom under Landgrave Louis X, later Grand Duke Louis I of Hesse and by Rhine (1753–1830). Influenced by the literary passion of his mother, the Great Landgrave Caroline (1721–1774), who was in close contact with very many of the intellectual greats of her time, he developed a fervent passion for collecting while still a hereditary prince. Louis took advantage of the favourable circumstances of the time. Secularisation and the temporary possession of Westphalia brought extensive monastic libraries with valuable medieval manuscripts to Darmstadt. The Cologne copy of the Golden Bull of Emperor Charles IV, which has now been added to UNESCO's Memory of the World Register, was also acquired via Westphalia. The library achieved a coup with the partial purchase of the collection of Baron William Carl Adolf von Hüpsch (1730 – 1805) of Cologne, as after his death Louis was sole heir to the extensive holdings. In addition to acquiring historic cultural assets, the Grand Duke invested increasingly astronomical sums in the procurement of modern literature, laying the foundations for a universal scientific library for all subject areas. 1817 saw the end of the division between the princely private library and the court library. The united court library was now opened to the public. Librarian Andreas Schleiermacher designed a sophisticated bibliographic system for the entire field of science, and in doing so gave the library a new order that still lives on today in parts of the old holdings (known as the Schleiermacher catalogue).

The court library was steadily expanded throughout the 19th century. In 1871, it acquired the Grand Ducal Library, and in 1873 the music manuscripts and sheets of the Court Music Library. By the beginning of the 20th century (1902), the Darmstadt Library had a collection of 454,000 volumes, which made it one of the nine largest libraries in the German Empire. In 1917, 100 years after it was opened, it was renamed the Court and State Library. 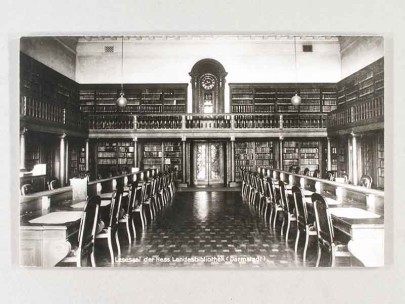 From 1920, the library was referred to only as the State Library. It took over part of the Grand Ducal Cabinet Library, the State Theatre Library and, in 1931, the library of the Hesse Technology Museum. This is also how the former patent specification centre (now the Patent and Trademark Centre Rhine-Main) came to the castle. In 1922, the State library received the Freiherrlich von Closen-Günderrodische entailed estate library from Höchst an der Nidder on permanent loan. It consisted mainly of writings from the 16th to 18th centuries with the focus on theological, historical and political literature. In 1958, the library finally became the owner of the collection.

Among Darmstadt's librarians, Adolf Schmidt in particular attracted attention for his research on the history of bindings and holdings beyond Darmstadt. In 1930, Hanns W. Eppelsheimer (director 1929–1933) discontinued the old categorisation system and switched to a mechanical one. For works from 1901 onwards, he replaced Schleiermacher's now obsolete system with a new catalogue of subjects based on a method he had developed himself and which had been tried and tested at Mainz City Library. After years of restricted space, the 1920s finally brought the long-awaited structural expansion. Following the museum's relocation to the new building at Herrengarten and the takeover of the castle by the People's State of Hesse, the conversion of the castle had been planned since 1919. In 1926, 1931 and 1932 the new rooms, each designed in the style of its time, were handed over to the public.

In 1933, Eppelsheimer, as host of the German Librarians' Day, experienced the assimilation and submission of librarians to the Nazi regime. Soon after, he was dismissed for political reasons and replaced by a National Socialist activist with no library experience. Unlike public libraries, most academic libraries did not participate in the Nazi state's book burnings. Banned books were marked and secreted, but not destroyed. The library acquired National Socialist literature, having had virtually none in its collection before then. Confiscated books reached the State Library via the Reich Exchange Office, and it is likely that Nazi loot was also acquired by other means. Reappraisal of the history of the collection is made more difficult by the tremendous losses suffered by the library in the war. In the night of 11/12 September 1944, the library was consumed by fire in a bombing raid by the Royal Air Force. Over 50% of its holdings (about 400,000 of 720,000 volumes) perished in the ruins of the castle. A part of the old collection along with manuscripts and other treasures were relocated for safety. On site, more recent literature and the holdings in the reading rooms were almost completely destroyed. However, the banned literature that had been secreted and stored in specially reinforced rooms was safe.

A similar fate befell the library of what was then the Technical University, which was founded in 1872. Two thirds of its holdings were decimated (about 80,000 of 120,000 volumes). In 1948, the state government merged the two library ruins and built the new “Hesse State and University Library Darmstadt” (1948-1999). The unified library retained its traditional location in the new castle, which was rebuilt in stages up until 1958. In the post-war years, the library had three main tasks to fulfil in reconstructing its holdings. In addition to filling the gaps created by the effects of war, the focus was on acquiring the most important foreign literature from the war and pre-war period as well as on the ongoing purchase of new publications both at home and abroad. The years of reconstruction in particular saw large-scale takeovers of government, school and private libraries and antiquarian purchases. This meant that Nazi loot was also able to find its way into the library, and this is still being identified. After the dissolution of the Offenbach Archival Depot, in which the American military government collected the looted goods and libraries of the Nazi organs for recording and restitution, the open remaining holdings were handed over as trust holdings to the Hesse State and University Library Darmstadt and other institutions.

At its central location in the castle, the LHB became a permanent fixture of Darmstadt's cultural scene. Readings, exhibitions and musical events in the castle's domed hall attracted tremendous attention, and went down extremely well with the population. For the Technical University, it was effectively a central library that was supported, depending on the subject culture, by a smaller or larger number of institute and seminar libraries. In 1971, the library was given an additional location with the establishment of a branch library on the Lichtwiese campus, which was newly founded by the Technical University. The branch library holdings were geared to the departments and subject areas located there.

Over time, the capacities of the two locations proved to be inadequate. In 1989, the Patent Information Centre (now the Patent and Trademark Centre Rhine-Main) relocated to a building at the University of Applied Sciences. In 1993, the theatre history and map collections were moved to the refurbished House of History (Mollerbau) at Karolinenplatz. The removal of the State Archives meant that the east wing could now be converted. A larger reading room and open-access magazine stacks had been available here since 1997. In the 1990s, many areas of the library were converted to electronic data processing.

Integration in Technical University of Darmstadt

In 2000, the Hesse State and University Library was integrated into Technical University of Darmstadt as a central facility. This opened up new opportunities for cooperation in the university library system. During this process, the libraries of four departments were combined into branch libraries, which meant a further increase in the range of services for the departments.

In 2004, the library changed its name to “Universitäts- und Landesbibliothek Darmstadt” (ULB) and was given a new logo to reflect its integration into the TU. This name change reflected the affiliation, manifesting its function as a central university library. In 2006, the archive of the Technical University, the central memorial institution of TU Darmstadt and its predecessors since 1836, became an organisational part of ULB. The Hesse Library Act of 2010 clearly defined its tasks as a scientific library for the university and the public.

The aim of creating a single functional layer by integrating the decentralised units into a powerful modern library has been consistently realised since 2012. Within the space of six months, between 12 November 2012 and 27 May 2013, two new library buildings were opened and the holdings of the formerly decentralised libraries merged with the holdings of the central library. This cleared the way for the renovation of the castle, to which a third library location for humanities subjects will return once the construction work is completed.