Manuscripts from all over the world, unique specimens such as the Thesaurus Picturarum, interesting contemporary documents from politics, society, culture and religion. Incunabula and historical prints complete the documentation of life, work, political activities and religious zeitgeist in the Middle Ages and the early modern period. 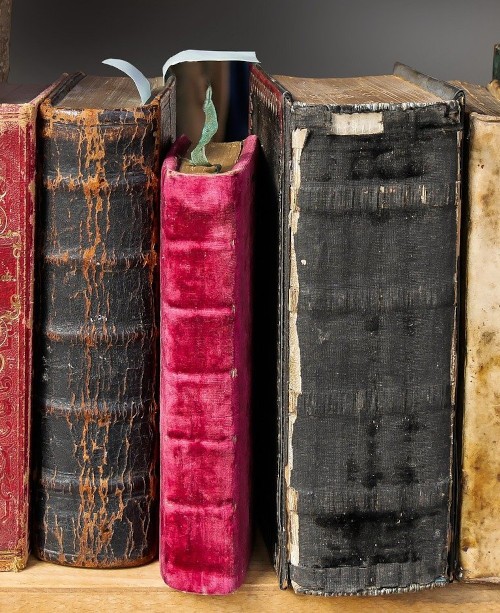 ULB Darmstadt holds almost 4.000 manuscripts from the Middle Ages and early modern period, more than 2.000 incunabula and over 100.000 historical prints from before 1800.

The holdings are from the early Middle Ages, late Middle Ages and early modern period (such as the two Nibelungen manuscripts). The instructional manuscripts comprise a large part of the collection: liturgical and prayer books from the theological field as well as legal and medical books. Illuminated manuscripts are very special, as they were usually commissioned.

Although most of the manuscripts are in Latin, there is a large quantity of others in German, mainly 15th century, and Middle Dutch manuscripts, which came from the Cologne collection of Baron Hüpsch. The occasional German commentary can be found in the Latin texts, and a number of fragments have survived.

1. Book purchases by the landgraves and grand dukes
The landgraves mostly collected contemporary books for their private reading pleasure. The few manuscripts in these collections came from individual private scholars whose libraries were purchased.

2. Monastery holdings from secularisation
Because of secularisation, monasteries had to hand over the manuscript holdings that they had collected and preserved over centuries to the worldly sovereigns. As a result, Darmstadt library received the following monasteries' holdings:

In 1805, Baron von Hüpsch of Cologne bequeathed his significant book collection to Landgrave Louis X (later Grand Duke Louis I). It included a large number of items that originated from the area around Cologne and the Belgian-Dutch region, as well as from the Middle and Lower Rhine. With about 1,000 manuscripts and even more incunabula, it was a tremendous boost to the court library holdings.

The collection is still being expanded today through purchases or donations. Book sponsorships can help to make particularly shabby copies usable again so researchers and the public can benefit from this cultural heritage.

It was around 1450 that Johannes Gutenberg developed book printing some 40 kilometres from Darmstadt. The printed works created up to the end of 1500 are known as incunabula or cradle prints. This invention meant that publications could be brought to an extensive readership quickly, in large quantities and simultaneously. One of the challenges of this invention lay in replacing the artistically crafted manuscripts with prints of equal artistic value. The ULB holdings contain many examples of this book printing art.

Catalogues in the research reading room