The Darmstädter Tagblatt, which ceased publication in 1986, was one of the longest continuously published (daily) newspapers in the German-speaking world and the most important leading medium in Darmstadt and the Southern Hesse region. 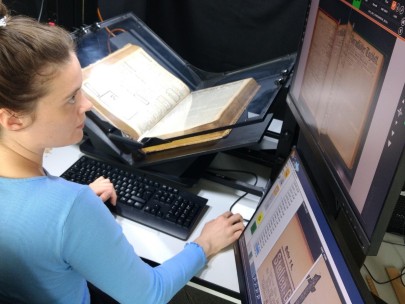 It may be “yesterday's news”, but it's certainly tremendously interesting for today's research! But at the same time, the original editions are at risk because of their age. The paper is of the most basic quality, and the greatest care must be taken when turning the pages of the bound volumes in the University and State Library Darmstadt.

The ULB – together with the Institute of Linguistics and Literary Studies at TU Darmstadt – has therefore taken the initiative and set about maintaining access to this important newspaper for the public and for research, and to improve it in digital form.

As the first research project, a team led by Professor Marcus Müller will use part of the data to conduct a discursive linguistic study into the change in the public risk concept 1850-1915 using the example of the Darmstädter Tagblatt.

Discontinued in 1986, the Darmstädter Tagblatt was one of the oldest periodicals. and is one of the longest continuously published (daily) newspapers in the German-speaking world. It was the most important leading medium in Darmstadt and the Southern Hesse region. The various manifestations, starting with the weekly “Darmstädtische Frag- und Anzeigungsblättgen”, represented the development and change of the press from the early beginnings to the mass medium of the 20th century.

Due to the distinctly regional layout, the editions of the 18th century in particular are an important source of the regional history of the old landgraviate of Hesse-Darmstadt. An internal structure established over long period of time with unchanging columns (e.g. food prices) provides serial data as the basis for social and economic historical questions. After digitisation, the valuable statistical material handed down here is available for comparative studies as well as for regional research. In the same way, the guest or passenger lists that contain the names of foreign persons staying in Darmstadt overnight can be used in combination with external sources for research into early modern mobility.

In the 19th century, local and regional news as well as literary content increasingly found its way into the paper; by 1874, the lasting change of content and form to a modern daily newspaper had been completed with the adoption of the new title of Darmstädter Tagblatt.

In 1941, the newspaper creased publication by order of the Reich Press Chamber. In 1945, the “Darmstädter Echo” was the first daily newspaper in Darmstadt after the war to receive a licence from the American military government, and it remained the dominant newspaper in southern Hesse until the re-publication of the Darmstädter Tagblatt in 1950. Over the next few decades, the two newspapers competed on the region's close newspaper market with similar offerings. Until the discontinuation of the Tagblatt in 1986, the newspaper was the primary source for the regional reception of global phenomena and events as well as for local discourse on current topics from the Rhine-Main area.

In the ULB, the originals of the newspaper are in great demand by research and the public but, due to their age and the nature of the material, they are difficult to handle and can only be viewed with restrictions in the Research Reading Room.

The aim is to digitise and present the Darmstädter Tagblatt in a high-quality digital form in accordance with current technical possibilities and FAIR principles. A new class of Optical Character Recognition (OCR) software that is based on neural networks and “capable of learning” is used to recognise the text of the newspaper with a very high degree of accuracy and encode it with structural data.

As the first research project, a linguistic annotation will be undertaken by a team led by the co-applicant Professor Marcus Müller to form the basis for a discursive linguistic study into the change in the public risk concept 1850-1915 using the example of the Darmstädter Tagblatt.

All the data, images, bibliographic structural data and full texts will be made available to download and via interfaces (REST, OAI-PMH) and transferred to long-term archiving.

The German research Foundation (DFG) is funding the project, initially for the publication years 1740-1941. A follow-up application for the remaining course of the Darmstädter Tagblatt (1949-1986) is planned for 2021. In preparation for this second phase of the project, the ULB is currently undertaking a comprehensive identification of copyright holders. For non-public domain works, a free license agree will be sought with the authors, photographers and agencies. Echo Medien GmbH is a cooperation partner in the project.

To begin with, the years 1740-1941 (until the temporary discontinuation in WWII) will be digitised and presented on a free Internet platform of the University and State Library. This milestone should be reached by the summer of 2021. The Tagblatt can then be browsed and searched virtually not only by publication date but also, for instance, by keywords, names and historical events. For this purpose, the text of the newspaper pages will be “recognised” and made machine-readable with the latest technology.

The second phase of the project is to include the years 1949-1986 – providing further funding is approved. This would make the complete title available online.

In preparation for the DFG funding for the second phase, the ULB has embarked on a comprehensive search to locate further permanent and freelance employees of the Darmstädter Tagblatt.

If you belong to this group of people, or have a special interest in this project for other reasons, please email tagblatt@ulb.tu-… so we can inform you of the progress of the project.